“Chronicles Feature”
A story of Resilience, Perseverance and Success 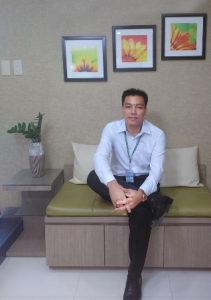 “Success is no short cut”, that is, as it becomes harder, the fruits become sweeter.

In Ambica, we have one of the few success stories for the books. The story of Mr. Noel Decandido, a Business Unit Head (BUH) of the XD Department, may be an inspiring one for his fellow employees.

Noel’s story started in a residential area in Tugatog Malabon where he and his two siblings were raised by their parents.

Tragic news reached them in early 1997. His father died, and this untimely demise of the head of their family prompted his mother to bring the whole family to the Province of Capiz. He was in 5th grade when they left Manila, and the unfortunate events in their lives became an inspiration and a good rallying point rather than discouragements, thus continuing his dream to finish his studies and to uplift the status of his family.

In March 2006, Noel finished college with a degree of Bachelor of Science in Economics in Capiz State University. He then decided to go to Manila to try his luck in July 2006. Life was never easy for him as he was hired as a helper in one of the stores in Cartimar Arcade in Libertad Pasay.

In 2008, he was hired as an all-around helper and messenger by a company in Pasong Tamo, Makati. But in 2009, Mr. Deepu Bhatia brought him into Ambica as a member of the Logistics Department. He was a “pahinante” or somebody who accompanies the driver during deliveries. Until a good break came in after 6 months, he was then reassigned as a medical representative of dermatologic products for 8 months.

In January 2010, Noel came in as a new member of the XD Department to take care of new exclusive distributorship accounts. Success did not come overnight from then on. There were periods of struggles but he never gave up but to treat them as challenges. Until 2013 came in, he registered 4th in total sales among the members of the Exclusive Distribution Department (XD). From then on, he was promoted as a Business Unit Head (BUH). The latest of which came in 2015 where he finished in the top 3 salesman of the year.

Noel’s wish was just to raise his own family, help his siblings, mother and live a simple life. But now, because of his current success, he can now support his family that he could not do years back due to financial difficulties. He acquired a new house in Cavite for his own family as well as a residential lot in Capiz for his mother and siblings.

From “pahinante” to a topnotch Business Unit Head, truly an Ambica success story. A reflection of Ambica’s aim, that is, making the lives of the loyal men and women of the company better and brighter, as it serves the Filipino community by providing them with the best healthcare products available.