This famous quote was made to be realized by the Ambica International Corporation, one of the leading pharmaceutical companies in the Philippines.

Sitting in its corporate office in Merville Paranaque City, Ambica aims to provide the most effective and safe healthcare products by improving affordability, and availability for every Filipino’s well-being. Ambica sees that in the future, it would be the leading catalyst in enhancing health and wellness of the nation for sustainable development.

In August 2003, the Ambica International Trading Corporation was conceived and registered under the Securities and Exchange Commission (SEC).

In an ample room in a place located in Merville Subdivision in Paranaque City, measuring about 20 to 25 square meters, and with one unit of personal computer, 2 tables and a telephone line, the operations of Ambica commenced. A workforce composed of at least seven people who includes Mr. Kamal Abichandani and Mr. Deepu Bathia started then to realized a dream, that is ,to bring reliable, affordable and effective pharmaceutical products in the Philippines.

Within that same year,it then partnered with J.B. Chemicals and Pharmaceuticals Ltd and Wockhardt, which are top pharmaceutical manufacturers in India.

In 2005, it was approved as a local importer of pharmaceutical products by the Bureau of Food and Drugs. Amidst the on and off deliveries and unsustained growth, Ambica still managed to form its Business Development Team that was tasked to broaden the horizon of its products. The company then moved to a rented place in Vatican St in Merville and started employing medical and sales representatives to promote its products.

Everything came smoothly for Ambica until a strong typhoon later in that year caused a massive flooding in the vicinity of its warehouse and destroyed some of the stocks due for deliveries. But Ambica showed enough resiliencies, and with its leaders not giving up, it quickly got-off from the situation and recommenced its operations.

That became a good rallying point for Ambica because in 2007, Ambica was the first to launch the Recombinant Insulin and generic Amlodipine in the Philippines. Ambica reorganized because of its growing coverage and products ,and launched four divisions for marketing namely: Cardiovascular, Dermatology, Central Nervous System and Biotechnology divisions. Before the end of the year, the company moved to its newly acquired property in Amsterdam St., which now houses the corporate office of Ambica.

With the passage of the Universally Accessible Cheaper and Quality Medicines Act of 2008 or Republic Act No. 9502 (Cheaper Medicines Bill of 2008), a lot of opportunities and products opened up for Ambica to explore and make available to the local consumers.

In 2010, Ambica started its partnership with different reputable pharmaceutical companies and distributors in the promotion of its product in the Philippine market. 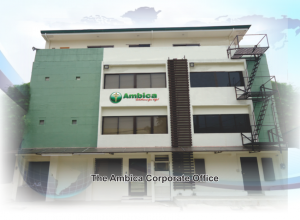 But in September 5, 2011, an event that doused a cold water in the bodies of everyone in Ambica happened. The Ambica warehouse caught fire turning stocks amounting to multimillion pesos into ashes. That very same year, employees decided to forego its Christmas Party event to help the company recover from the devastating catastrophe.

Like a pliant bamboo swaying through a very strong wind and straightening its branches and growing its leaves after a wrath, Ambica started to recover and rallied behind its leadership and supportive workforce. With that, Ambica has grown remarkably as it is now.

The company name was then amended and known as Ambica International Corporation. With the opening of its office in Vietnam and more than a decade of experience in the Philippines, Ambica has etched its name in the local pharmaceutical industry. It now represents products of manufacturers from 31 countries and has more than 250 products available in all leading drugstores.

Ambica has been the major game changer in the local pharmaceutical industry. Ambica will surely be on top in the coming years as it provides good, affordable and quality medicines for the Filipino people.